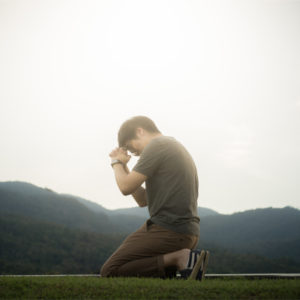 This article is published by CCEF

Recently I read the story of Jesus healing the centurion’s son (Luke 7:1–10) and was struck by the two times “worthy” appeared. Pay attention to the word as you read the story:

After he had finished all his sayings in the hearing of the people, he entered Capernaum. Now a centurion had a servant who was sick and at the point of death, who was highly valued by him. When the centurion heard about Jesus, he sent to him elders of the Jews, asking him to come and heal his servant. And when they came to Jesus, they pleaded with him earnestly, saying, “He is worthy to have you do this for him, for he loves our nation, and he is the one who built us our synagogue.” And Jesus went with them. When he was not far from the house, the centurion sent friends, saying to him, “Lord, do not trouble yourself, for I am not worthy to have you come under my roof. Therefore I did not presume to come to you. But say the word, and let my servant be healed. For I too am a man set under authority, with soldiers under me: and I say to one, ‘Go,’ and he goes; and to another, ‘Come,’ and he comes; and to my servant, ‘Do this,’ and he does it.” When Jesus heard these things, he marveled at him, and turning to the crowd that followed him, said, “I tell you, not even in Israel have I found such faith.” And when those who had been sent returned to the house, they found the servant well.

Did you notice the contrast between the attitudes of the Jewish leaders and the centurion? The Jewish elders may have believed that the centurion’s simple message to Jesus, “Come and heal my servant” would not persuade Jesus to come. So, they made a case for why the centurion was worthy of Jesus’ attention, based on his work on behalf of the Jews: “he loves our nation, and he is the one who built our synagogue.”

Do you ever do that with God? Point to your resume of service for the kingdom to persuade God to answer your petition? Do you sometimes think that God is more favorably disposed toward you if you’ve achieved a certain level of obedience? Or if you’ve been “good” (in whatever way you’re defining “good”)? Or perhaps it’s even more subtle: you won’t run to God in repentance and faith after committing a sin until you have established a 24-hour track record of obedience. You come when you feel just a bit more worthy to come. I suspect we all have such lurking legalism within us.

The orientation of the centurion toward Jesus is radically different. He realized that he was precisely unworthy to have Jesus even come to his house. There was no reliance on his Roman position of authority or his benevolence toward the Jews. No amazing LinkedIn profile to flaunt. No sense of a quid pro quo—if you do this for me, maybe I can do something in return for you and your people. No presumption at all. He knows where he stands compared to Jesus. The centurion recognizes Jesus’ power and authority. Rather than shrink away from Jesus (who am I in the face of such power to ask him for anything?), he entreats Jesus to simply say the word and his servant will be healed. Jesus marvels at his faith and the centurion’s servant is indeed healed.

The centurion models for us a humble boldness. Humble in the sense that he recognizes his great unworthiness before a King far greater than the earthly one he had pledged allegiance to. And boldness in the sense that, despite his unworthiness, he came confidently to the One who he trusted would graciously receive him in his time of need. Often in our Christian lives when it comes to approaching God’s throne of grace, we see-saw between pride and self-abasement. We come confidently when we’re feeling pretty good about our performance. Or we slink away, guilt ridden and embarrassed to face him when we’ve blown it. Both of these responses reflect  a similar dynamic of self-righteousness—that is, we seek to be right in our own eyes. If we’re successful, we feel worthy. If we’re unsuccessful, we feel unworthy. Neither attitude is oriented toward God, under whose gracious and merciful gaze we live in both our successes and our failures.

A proper unworthiness recognizes there is no good in us apart from Jesus and so we come to him despite our many failings. His grace emboldens us.

A verse from the hymn “Come Ye Sinners” captures this dynamic well:

Let not conscience make you linger,
Nor of fitness fondly dream;
All the fitness He requires,
Is to feel your need of Him.
This He gives you, this He gives you,
‘Tis the Spirit’s rising beam.

Are you worthy? No. But Jesus doesn’t require fitness from you. You only have to feel your need of him. You only have to see that his worthiness is sufficient for you. And this means that no matter your need, you can come to him boldly today.