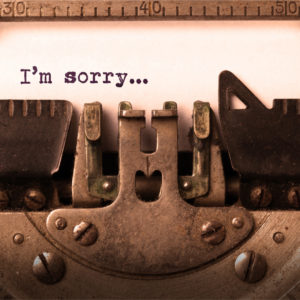 This article is by Alasdair Groves and published by CCEF

Sometimes “I’m sorry” is a selfish thing to say.

Sounds strange, doesn’t it? After all, repentance is a cornerstone of the Christian walk, right? Sadly, I can assure you that it is indeed quite possible to spout humble-sounding words of apology more in self-protection than in real repentance aimed at real reconciliation.

The basic dynamic of phony repentance works like this: I say I’m sorry in an effort to make the “offended” person feel better about me or to make me feel better about me. Whereas Scripture calls us to seek forgiveness for sins that have harmed others, self-serving apologies aim to deflect someone’s possible disappointment in us or to soothe our own inner discomfort.

Of course, I am not intending any of this when I say “I’m sorry!” When I call these apologies “phony,” I do not mean that I realized they are phony or had any idea that I was being self-serving. But so much of our sin is that way—we don’t even know we’re doing it. Just because we don’t know we’re doing it, however, doesn’t mean it isn’t causing harm.

Self-serving apologies do their damage by functioning as relational pre-emptive strikes. A friend apologizes all the time for things that don’t need an apology; she’s trying to defuse possible critiques before they can get to her. After going long again on a sermon, a pastor says “I’m sorry about the time”; he is trying to ward off his fear that his congregants are annoyed or might even mention the length of his message. A husband says “sorry I’m running slow”; he is trying to keep his wife from raising his pattern of making the family late getting out the door in the morning.

Other times the apology is not so much trying to avoid criticism as it is an attempt to win praise that will soothe the apologizer’s internal anxiety. Thus, an employee tacks on “I’m sorry if this isn’t what you wanted” when presenting a project to her boss, even though she has already poured too much time into meticulously perfecting it. The apology is trying to prod an affirming “no, no, this is great!” from her boss which will calm the inner murmur of her anxiety that she may have overlooked something.[1]

For me, the biggest temptation to offer a pre-emptive apology is when I’m in some kind of conflict. I don’t like conflict, so I may feel some version of “no, that’s not fair, you’re wrong” but instead of initiating honest, constructive dialogue over my concern, I am tempted to apologize my way out of the situation. If I sense that I can end the conflict by an apology, I may take the blame at the moment but secretly nurture a grievance.

I first noticed that my apologizing could be a problem on the basketball court. I’m the guy who finds himself constantly saying “my bad!” However, it was experiencing apologies from a few of my counselees that really alerted me that my apologizing might not be as helpful as I thought. It was eye-opening to live on the other side of frequent and awkwardly-offered apologies:

“Sorry I keep talking so much!”

“Sorry I didn’t do the optional assignment we talked about last week!”

“Sorry I am so annoying when I’m tired!”

These were coming from people I otherwise enjoyed talking to, so I was surprised to discover that these little apologies bothered me. When I did it myself, I assumed others were appreciative. But once I was the one receiving them, it turned out I found them more irksome than redemptive.

Ultimately, if someone is apologizing for something that didn’t really require an apology in the first place, it just makes things awkward for the person receiving it. And if someone’s behavior really does display a problematic pattern, a constant “oh sorry about that!” does not help. Either way, apologies are a gift from God that allows us to take any harm we’ve caused seriously. Using repentant words to keep others off our back is selfish and turns God’s good purpose on its head.

Happily, there are no irredeemable character flaws. When the Spirit convicts us that our apologies are more of a shield than a genuine attempt to reconcile, he is leading us into something good. Having alerted us to the problem, he delights to strengthen us to hear out and even seek out others’ real concerns rather than hiding behind “So sorry!” Because Jesus has already secured ultimate forgiveness for us, we don’t have to be ruled by the fear of offending or receiving criticism, nor by the reality that we do, at times, fail others. His pardon allows us to take seriously any griefs we have caused rather than guarding ourselves against criticism or performing perfectly for people we want to please.

…Shoot. I’m sorry this blog is so long. I shouldn’t have taken so much of your time on a minor issue! You are probably tired of reading it—I knew this was a bad idea. I’m really sorry!

Oops. There I go again…

In all seriousness though, what a comfort to know that our smallest and most subtle sins are areas into which the Lord will eagerly leap into action when we invite him to grow our love and courage. As a work in progress, I can testify that the Lord has used the Spirit’s work in this “little” area to make a big difference, freeing me from the fear of criticism and failure. I know he would be delighted to help you in this way too!

[1] There can, of course, be other reasons one might over-apologize. Victims of abuse, racism, hyper-authoritarian religious backgrounds, or anyone who has been repeatedly oppressed and shamed can be convinced that they are simply always wrong. Here, the underlying issue is the warping impact of shame on their view of reality, rather than pride or anxiety-based fear of what others will think.