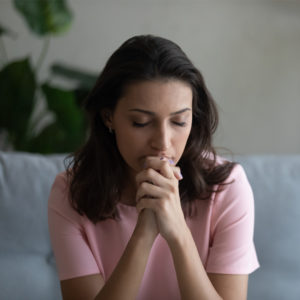 My wife, Heidi, our two teens and I had just moved to our home near Denver when we were invited to our first “flamingo party.” What’s that? It’s a gathering of neighbors on Friday nights in the summer. You know where the party is happening by looking for the gaudy pink plastic birds by the side of a driveway. Find the flamingos, and you’ve found the party. Heidi and I were excited about this new opportunity and felt that it was an answer to our prayers. God had opened up doors of relationship and influence with the neighbors around our new home.

At our inaugural flamingo party, at Lynn and her husband’s house, we met Kathy. She had a fun and gregarious personality, and her quieter fiancé, Don, seemed like a great guy as well. We hit it off immediately.

But it soon became clear that we were spiritually miles apart. In spite of those differences, our friendship gradually deepened. And as we sensed a growing openness in Kathy, Heidi and me — and sometimes our kids — began praying for God to work in both her and her fiancé’s life.

One of the first changes in Kathy came when Heidi told her that our son had won a national speech contest. He’d given a persuasive speech about abortion. Kathy was cautious, but said she’d like to hear it. Once she did, the speech seemed to connect with her in a more spiritual way. She said, “If you’d have asked me a half hour ago, I would have told you I was pro-choice. But now, after watching Matthew’s speech, I’ve decided I’m pro-life.”

This was one of the signs that God was at work in Kathy. Over the weeks and months that followed, our conversations became increasingly focused on spiritual matters, and she was always full of questions. Everything culminated one autumn day when Kathy told us she wanted to bring over a new apple dessert she had made — and to ask some questions. As it turned out, the dessert was delicious, but the conversation was even better.

After we had discussed several spiritual issues Kathy raised, I asked her if I could show her a picture that sums up the central message of the Christian faith. She was interested, so I drew her my version of the Bridge Illustration —which demonstrates humanity’s separation from God because of sin — and soon Kathy’s tears began to flow. She was a ready learner, and before I’d even finished the drawing and explanation, Kathy got impatient and said, “I get it: God’s over on that side and I’m still on this side. Tell me how to get over there!”

Kathy was ready! So through sobs of repentance and joy, she held Heidi’s and my hands and asked Jesus to forgive her sins and to begin leading her life. It was Oct. 19, 2011 — Kathy’s spiritual birthday — and she has never been the same since.

Kathy has become a bold and joy-filled witness for Christ in our neighborhood, in her family, at work and wherever she goes. It has been a thrill for Heidi and me to see how God has worked in and through her since that day.

About a year later, our church launched the 1-1-1 Prayer Initiative, a movement in which we all committed to pray for the salvation of 1 person, for 1 minute at 1 pm each day, asking God to draw the person to Him. I began to pray consistently for Don, Kathy’s fiancé.

A few weeks later I reached out to him. We went to a café for breakfast and then ended up talking in my car in the parking area of a trailhead. As with Kathy, I drew him the Bridge Illustration, and he ended up praying with me to receive the forgiveness and leadership of Christ. It was Saturday, Dec. 8, 2012 — another spiritual birthday.

Sadly, around this same time, Lynn — whose house we had gone to for our first flamingo party — went through a divorce. Suddenly she found herself living alone in her multi-bedroom home. Kathy and Heidi reached out to encourage her.

Heidi suggested that she might benefit from having a housemate for a while. She told her about a close friend of ours, Nancy, who was moving to the area and needed a temporary place to stay. Lynn said yes. Within a few weeks of staying at her place, Nancy led Lynn in a prayer of commitment to Christ.

Not long after that, Kathy, Don and Lynn expressed their desire to be baptized. So we invited the neighbors to a house one block over from ours. There we could use the owner’s outdoor hot tub. Heidi led our group in singing a few worship songs. And we heard testimonies from Don and Kathy (who are now married), as well as from Lynn. Then I had the immense privilege of baptizing all three of them on a snowy Sunday morning. The steam rose from the hot tub and a mix of friends, neighbors and relatives cheered them on.

This kind of thing doesn’t happen to us every day. But it was a poignant reminder that the Gospel still has power to change lives. As Romans 1:16 (NIV) explains, “It is the power of God that brings salvation to everyone who believes.” It’s a reminder that God wants to work through us, not just as individuals, but as couples and whole families. He wants to use us to impact the lives and eternities of those around us (Colossians 4:5).

Consider joining the 1-1-1 Prayer Movement. Think about someone in your life who doesn’t yet know Jesus. Commit to praying for this 1 person and his or her salvation for 1 minute, at 1 pm each day. Then reach out to them, as a support, whether you talk about spiritual things or do something together. When you do this, God may use you in this person’s life. He used Heidi and me, and we are forever grateful.