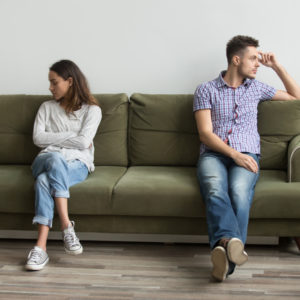 My husband and I knew we were too upset for a conversation—but we had it anyway. What started as a tense volley of one-liners devolved into a yelling match and then the ice-cold silence that often follows our heated exchanges. By the end of the evening, we were both exhausted from the tension and frustrated by our inability to communicate.

I wish I could say this exchange happened ages ago. But it didn’t. It happened last year.

I’ve spent most of my adult life engaging in the dynamics of relationships—what works, what doesn’t and how we move past the hurt into places of vulnerability, connection and love. Though I’m a “professional” relationship person, I still find myself in frustrating situations with my husband in which we both feel misunderstood, unseen and disrespected. But what made this conflict different from others in the past is that we allowed it to lead us toward, rather than away from, deeper places of connection and love.

Most of us have experienced arguments in marriage, moments of conflict. We try to communicate our needs or desires to each other and end up feeling misunderstood, or even worse, dismissed. Our natural reaction is to blow up, shut up or give up. But there is another way. It’s not about never having a disagreement or conflict with your spouse; it’s about what you do after it happens.

Growing closer after the fight

The moment after the irritated, raised voices or cold silence is when we recognize that we’ve misunderstood each other. What we do next is an opportunity to either let the argument drive us apart or bring us together. To grow closer through conflict, we need some new tools in our relationship toolbox.

According to Dr. John Gottman, a marriage therapist, author and researcher, only 30% of problems that couples face are solvable. Perhaps that’s why we rarely focus on the real, unsolvable problem when we argue in our marriage.

I might feel frustrated because my spouse always seems to be on his cellphone when we’re talking. But the problem isn’t necessarily the phone; it’s the fact that I feel disregarded when I want to connect with him.

The majority of the problems couples fight about have to do with our personalities, wiring or conflicting values. When we fight, many of us see only what is in front of us without asking the deeper questions about what is really upsetting us. Next time you argue with your spouse, allow curiosity to help you understand what the real problem is.

Curiosity helped me understand that if my spouse is scrolling on his phone when I’m trying to talk with him, I interpret his lack of undivided attention as a lack of interest in me. That’s the primary problem. The cellphone is secondary.

When we’re curious about our perceptions and interpretations, we get in touch with our actual hurts, desires and longings. And that is the place where intimacy can grow.

Fighting about behaviors often keeps us from addressing more vulnerable issues of desire and need. But breakthrough moments happen when we’re willing to move past the behaviors into deeper conversations. Only then can we open ourselves to each other with vulnerability and courage.

For instance, I once worked with a couple named Debbie and Mike, who were dealing with behavior issues. They squabbled over weekend plans, social time with other couples and parenting.

To move past these arguments in marriage, they needed to have deeper conversations about how their behavior, such as squabbling over weekend plans, led to feelings of frustration and disappointment, and how each person was interpreting those feelings. These moments would happen only when Mike (or Debbie) could honestly say, “When we talked about weekend plans, I felt frustrated that you walked away. I interpreted that to mean that you didn’t care or didn’t want to spend time with me. Can you help me understand your perspective?”

Conflict feels most threatening when we lose connection. When we disagree and then distance from each other, fear and insecurity rise to the surface. We tend to protect ourselves by blaming, guarding or acquiescing without really working through the conflict. But when we maintain connection, we are often able to compromise on behaviors to unite with love.

Closer connection happens when we let down our guard and validate the other’s experience. This doesn’t necessarily mean apologizing, although sometimes it does. Validating means seeking to understand the other person’s perspective and choose empathy that says, “I can see how you would feel that way” or “Now that I hear your side, I can see how that would be difficult/frustrating/disappointing.” Validation is the willingness to leave our corner and say, “I’m open to viewing this differently.”

Another way we move from defensiveness toward connection is by conveying commitment. Conveying commitment can be as simple as saying, “I’m on your team” or “I’m committed to us, and I want to work through this.” When we convey commitment, we soothe any fears (even irrational ones) the other person may have about conflict fracturing the relationship.