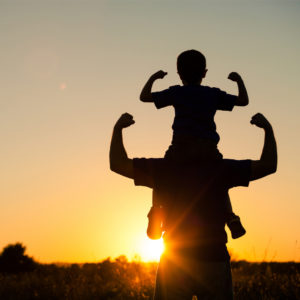 This article was written by Ed Welch and published by CCEF

There is not one psalm that is addressed to “Father,” “My Father,” or “Our Father.”[1] So when the disciples asked Jesus to teach them to pray, and he opened with: “Father, hallowed be your name” (Luke 11:2), it must have seemed foreign to them. They had heard Jesus pray this way. Now he invited them to address the Holy God of Sinai as their Father too. This signaled that big changes were ahead. And he invites you, and he invites me, to share in those changes.

Since the name father summons all kinds of memories for us, here are three passages that fill that name with accurate content.

[The Lord] said, “How I would set you among my sons, and give you a pleasant land, a heritage most beautiful of all nations. And I thought you would call me, My Father, and would not turn from following me.” (Jer 3:19)

This time the son doesn’t return. In response, the Lord reveals his desire. He still wants to be called, “my Father.” This desire is not a response to the people’s repentance because there was none. It is simply the inclination of his heart, and it is critical we know this.

We will never understand why our creator and rescuer would want to serve us, forgive us, be with us, and be called “my father.” But it is true. Your God is eager for you to. He loves it. It pleases him.

Recently, something happened that gave me insight into this. I was on a beach with my grandchildren. A few of my grandsons had struck up a nice relationship with two brothers who were like-minded Boogey boarders, and they were all coming in my direction. “This is my Griffy [my grandfather name],” announced my grandsons to these two boys. The boys intuitively knew that I was not their Griffy, so they simply gave me a kind greeting. The moment, of course, was a highlight of my day, because I couldn’t be more pleased to be called “my Griffy” by my grandsons. I want to be their Griffy; I like being their Griffy; I am honored to be their Griffy; and I will always be their Griffy, even when they are horrid, which does occasionally happen.

My Father—the Spirit of Christ teaches us to address our prayers—to my Father. So like the disciples, we, too, will gradually learn this most remarkable feature of New Testament prayer. Jesus is the Son and we, joined with him, share in this relationship. The same easy confidence with which Jesus prayed to his Father can now be our own (Heb 4:16). And given how this closeness and familiarity are the most unexpected features of how we pray, “My Father” can always leave us amazed. Go ahead and insert it into the beginning of any psalms you read and place it next to the other names of God. Scripture will immediately be more intimate, as your Father intended it to be.