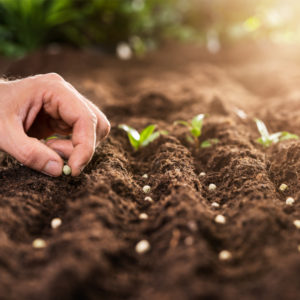 This article was written by Ed Welch and published by CCEF

Zechariah 4:10 says, “Who despises the day of small things?” Indeed, everything we do is a very small thing.

The Lord asks this rhetorical question of Zerubbabel, who led the rebuilding of the Jerusalem temple around 530 B.C. The Hebrew exiles were returning from Babylon, which was very good. What they returned to was an absolute disaster, which was not. The temple was unrecognizable to those who witnessed its former glory. Zerubbabel and his motley band of not-always-reliable volunteers would work at its rebuilding for “the day,” which turned out to be one day out of the twenty years it took to complete.

Before the Lord elevated the importance of the small things of the day, he spoke of how that work would become part of one very big day, the one on which the Messiah would come and “remove the sin of this land” (3:9). And all this would, indeed, come to pass. The temple would be rebuilt and the Messiah would come, “‘Not by might nor by power, but by my Spirit,’ says the LORD Almighty” (4:6).

These are very big things. Then, the passage draws your attention to a small thing. One stone moved into place. A plumb line secured. A step forward, a step back, and so on, and the temple is rebuilt. And then—the Messiah walks among us.

I have often mused, How does anything ever get done? How do I ever get anything done? By taking the next little step in a day of small things, by placing the next stone into place. The Maker of heaven and earth has determined to have us partner with him in his plans, and he is pleased to set a pace for us that seems very human.

If you are depressed, do not despise small steps. Ease your body out of bed by faith in the God who will use even that to build his house on earth. Eat something, even if you have no appetite, to respond to your Father’s call to a small thing. Feeling ready for another small thing? Try a word wrapped in love, spoken to another person.

If you are stuck in a sin and are being mastered by it, say “help” to one person whom you might not have thought of before but who now comes to mind as the right person.

If you are overcome with fear and are desperately clinging to self-protection, consider how you could place one stone, secure in your union with Jesus: Call someone who needs you to pray for her? Believe that the One who removed the penalty of sin in a single day is with you?

The basic idea of the passage is this: Where are you hopeless? Where do you believe God gives you a mission that seems far too big, such as getting through the morning? Consider just the tiniest piece of that mission. God does not despise that small thing, which is another way of saying that he asks nothing more than that, and he is quite pleased with it. He takes the small thing, assembles it with other small things, each adding their unique contribution, and the Kingdom of Heaven comes into view.