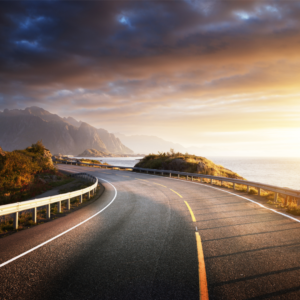 Not all of us know when we are nearing the end of our lives in the same way Moses did, but the reality is, not one of us is guaranteed tomorrow. So in some sense, there is wisdom in living every day with the intention of finishing faithfully. Moses served the Lord unwaveringly for 40 years, leading God’s people through life in the wilderness to His promise, but he knew he was not to enter the Promised Land with them. Moses is not the only example of finishing well we could look to, but he is a good one.

Moses knew his calling. Lead God’s people—not only to a specific geographic location but also toward God. Early on, he’d been acutely aware of his shortcomings, but in his final weeks and months, his self-consciousness was gone, and his focus was laser-sharp. They must ‘get there.’ The book of Deuteronomy is the accounting of Moses’ last words. Like Paul’s final discourse with the Ephesian elders in Acts 20, Moses’ passion is evident. He knows the finality of this conversation. So, where does he focus?

Moses Taught Them from Their History

Moses turned their attention back. History is a valuable teacher for daily life. The Israelites had a national history of centuries of slavery in Egypt, then a miraculous deliverance with bounty to provide for the trip. Because of their lack of faith in God to enter into the promise, they wandered in the wilderness for 40 years, but those wilderness years were not wasted, as they were deeply meaningful teachers. Every one of those days (excepting the Sabbath day’s unique provision), manna fell from heaven for their daily sustenance. For 40 years, they had done nothing to supply their daily needs. God manifested His presence in this and other very practical ways. The fear and faithlessness that turned them from the Promised Land the first time was replaced with 40 years of new history—the history of specific and supernatural presence and provision. Moses called them to remembrance.

Moses wanted them to know God’s words. He was intent on delivering what He had received from God to them, not driven by or motivating others by duty. Instead, he invited them to respond relationally to their relational God. “For what great nation is there that has a god so near to it as the Lord our God is to us, whenever we call upon him?” (Deut. 4:7). He beckoned them not only to know God’s words but to yield their hearts and lives to Him in faith-fueled obedience.

Along with the counsel of God came an earnest warning:

“If you are not careful to do all the words of this law that are written in this book, that you may fear this glorious and awesome name, the LORD your God, then the LORD will bring on you and your offspring extraordinary afflictions, afflictions severe and lasting, and sicknesses grievous and lasting” (Deut. 28:58-59).

“Beware lest there be among you a man or woman or clan or tribe whose heart is turning away today from the LORD our God to go and serve the gods of those nations. Beware lest there be among you a root bearing poisonous and bitter fruit, one who, when he hears the words of this sworn covenant, blesses himself in his heart, saying, ‘I shall be safe, though I walk in the stubbornness of my heart’” (Deut. 29:18-19).

God was extending His heart to His people. Turning from Him would extend the suffering and loss they experienced during the previous 40 years. It is significant to note that, though they were about to wage battle with many nations greater than themselves, Moses did not warn them of the dangers in this world, nor did he seek to guide their plan for conquest. The centrality of the message was the hearts of God’s people turned toward the heart of God.

A careful examination of Moses’ last words reveals relational wisdom we would do well to learn. Generously dispersed throughout the instructions and warnings is a substantial measure of promise. Over and over again, Moses reminds his beloved people that God’s nearness is their good. “God will fight for you” (Deut. 1:30), “when you seek the Lord you will find Him” (4:29), even when your hearts wander from Him, God “will not leave you or destroy you or forget the covenant with your fathers that He swore to them” (4:31). As he considered the conquest that lay before them, he reminded them of the bounty in the land the Lord promised to them (8:7-9). They were brought out of slavery, not for wilderness living, but to enter into the Promised Land, so Moses keeps the promise front and center in his discourse.

Moses Spoke God’s Calling to Them

The Israelites were to take the land. The inhabitants were no less intimidating than they had been to the ancestors whose faith had failed them, but now they had 40 years of personal experience with God’s very present help. “Go because God will work the victory.” This was central to the calling God had placed on their lives; the fulfillment of His promise to Abraham.

The final chapters of Deuteronomy resound as a crescendo from Moses’ heart. He has said everything he needs to say, repeats it, and finally writes it in a song, with the hope that they would sing it in remembrance. With an apparent complete disregard for his imminent death, Moses lays before them words of life and death and urges them to choose life. May God’s grace propel us toward faithfulness that honors His name in a similar manner.