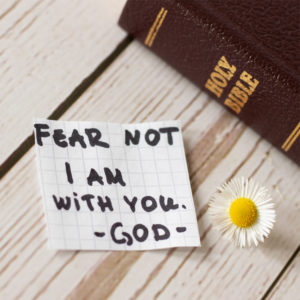 His words remind us (again) that, by His death, He rescued us from the fear of our death. Therefore we are released from having to “cower through life, scared to death of death.”

With her parents’ blessings, Jennifer left the comfort of her Colorado home and moved to Los Angeles to pursue a career in entertainment. As with so many new ventures, things did not go as expected. Real success and security remained just out of reach. So, she took other jobs and tenaciously continued to chase her dream. Of course, her parents helped her. But, like any responsible person, she just came to a point of feeling like she could not ask again. Then, she finally ran out of money. Totally. She told me, “I literally had no money in my account and no gas in my car to make it to my shift at work.” Reluctantly, she called her Mom. But, with that call, she learned that her grandmother (after a disturbing dream about Jennifer’s wellbeing) had arranged for money be sent to Jennifer’s account. So, while she was “running on empty” and facing fear and despair, Jennifer’s account already contained a large amount of money! The Lord’s provision was as near as any ATM.

What do you fear?

Jennifer’s story is only one of innumerable examples of how perceptions are often wildly different from reality. Just because we see, hear, feel, think, and fear certain things does not mean that they are real. So often, vivid and terrorizing perceptions only exist within the nine inches between our ears. Obviously, God created fear. It is hardwired into every creature. Fear plays a vital role in human life. It is an instinct, warning us of impending danger. How often have you heard about, or experienced, that heightened sensory alert – “every hair on end” – watching a child run out into traffic? Have you ever felt a cold chill just before the rattlesnake struck at your feet? That kind of fear is God’s gift for the survival of the species. It produces life-saving, sometimes heroic, actions. The fear of the Lord is not only a biblical attitude, but is essential to effectively navigating through life and its various challenges. But, another kind of fear hits us like an assault or an invasion. It does not originate in our instincts, but rather in our mind and emotions…. I know I have cancer. What if I loose my job? Will we end up living on the street? Is my child on drugs? How will I survive if he leaves me for that woman? Those fears usually have no basis in reality at all. They are figments of imagination and usually produce only apprehension and immobility. I think the best way to overcome that unhealthy invasion of fear is to, first, realize it is rooted in a fear of death. The Bible says that Jesus took on the form of flesh and blood in order to defeat the One – the devil – who wields the fear of death. In other words, through his snarling death threats, Satan terrorizes those who live in a mortal body. So, Jesus took on that very same physical form in order to demonstrate what victory looks like. And, in so doing, He “freed those who all their lives were held in slavery by their fear of death.” (Heb 2:15 NIV). Consider how The Message translates Hebrews 2:14 & 15: “Since the children are made of flesh and blood, it’s logical that the Savior took on flesh and blood in order to rescue them by his death. By embracing death, taking it into himself, he destroyed the Devil’s hold on death and freed all who cower through life, scared to death of death.”Eugene H. Peterson, The Message,(Colorado Springs, Navpress, 2002) p. 2183. That is why Jesus could say, “Let not your heart be troubled, nor let it be fearful.” (John 14:27 NASB). His words remind us (again) that, by His death, He rescued us from the fear of our death. Therefore we are released from having to “cower through life, scared to death of death.” Gospel singer, Jake Hess, used to sing a song called “Death Ain’t No Big Deal.” That southern gospel tune was, in fact, good theology. When you step into Jesus’ victory, you become more relaxed about death. To die is to win.

Are you afraid of the times?

In 1985, a very wise and respected minister told me that, as we got closer to the year 2000, we would see great uproar and controversy and anxiety. I will never forget him saying, “Those millennium numbers, the zeroes, seem to release every human fear.” He also talked about what happened as the world approached the first millennium. All the economies in Europe were in serious trouble, the known world was convulsed with religious turmoil, and the planet endured various wars. In fact, a great fear of the end of the world and the last judgment flourished in many nations. Sound familiar? Have you ever wondered why the Bible repeatedly reminds us that the times and seasons are not our business? David understood that and wrote, “My times are in Your hand” (Psalm 31:15). Later, when Jesus spoke of global chaos – wars, famines, earthquakes, and pestilences, He said, “See that you are not troubled; for all these things must come to pass…” Matthew 24: 6 – 7 NKJV. So, wars, famines, earthquakes, and pestilences “must come.” They are essential seasons and rhythms for His administration of life on earth. It is immature to take them personally. In fact, we do well to remember that throughout history whenever people or movements or ideologies tried to do more than “be not troubled” – when they tried to figure out the times – they missed the times and the peace which He brings. Jennifer learned a great lesson about the Lord’s administration of life. He alone is the Maestro! Administrating the times is His business. While we get caught up in speculation about loss, shame, death, He has already made provision. And, when bad times do come – when we do experience loss, shame, and even death – they are different than they appeared in our imaginations.